Basically, It's Over by Charles Munger.
Posted by swifz at 9:11 AM No comments: 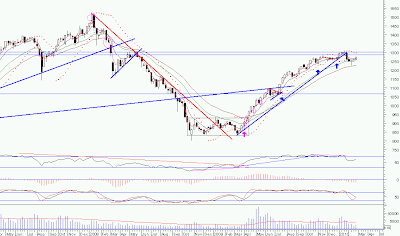 KLCI Weekly Chart
KLCI is still at the same position since Oct 2009. Still no signals to indicate any strong direction (up or down).

Seems that OSK and CIMB are both the most active warrant issuer. What happened to Kenanga and Am?
Posted by swifz at 10:56 AM 1 comment:

If you are having trouble of keeping track with warrants, you should consider my Bursa Malaysia Warrant Calculator that covers Singapore and Hong Kong warrants.
Posted by swifz at 2:59 PM No comments:

Email ThisBlogThis!Share to TwitterShare to FacebookShare to Pinterest
Labels: BM CW, US CW 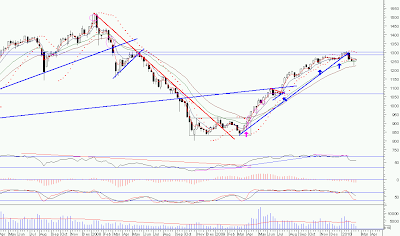 FBM KLCI Weekly Chart
Only 3 trading days in this week. A slight rebound. No strong signals on the direction of the market. 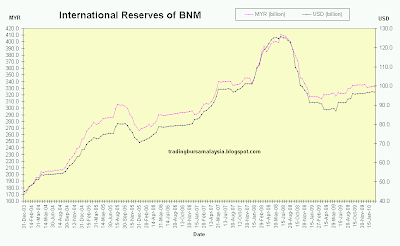 Source.
Posted by swifz at 6:57 PM No comments:

Email ThisBlogThis!Share to TwitterShare to FacebookShare to Pinterest
Labels: BNM

Thanks to Nick Tan who sent this to my mailbox. I was consumed with the house painting job until I have no time to read it until now.
Source.
**************************
HONG KONG: The Dow Jones Index gained significantly in the previous year of the Golden Tiger in 1950, but Tiger years are typically marked by dramatic changes and even upheaval, said CLSA Asia-Pacific Markets in its 16th CLSA Feng Shui Index (CLSA FSI).

In the report with a tongue-in-cheek look at what 2010 held for equities, commodities, property, celebrities, and the zodiac signs in the months ahead, CLSA cautioned investors to view 2010, much like the tiger itself, as an energetic and powerful, but impulsive and risky, year ahead.

“Those trading equities should get set to ride the wild tiger. The markets will be volatile with a surge in the first month followed by a decline that turns upwards in June, dips, and then swings up again in September to see the Golden Tiger roar by January 2011,” it said in a statement.

With this Tiger year’s heavenly stem being metal, CLSA said gold was set to have a great run and it predicted that it could break US$2,000 (RM6,820) per ounce.

“In fact, commodities of all stripes will fare well including silver, copper, zinc and aluminium. Those regarded as ‘wood’ will also do very well: pulp and paper, clothing and pharmaceuticals.

“‘Fire’ and ‘earth’ elements, thus technology, power, telecoms and property will have a good yearbut ‘water’ related sectors will be challenged, translating to a bumpy time for shipping, airlines, logistics, autos and transport,” it said.

The following is CLSA’s month-by-month take on the year.

• February would bring fantastic opportunities for those sharp enough to recognise them and fast enough to grab them.

• March signals the start of three bumpy months, but there’ll be no shortage of good trades for those brave enough.

• In April, the influence of the stars of misfortune is especially disruptive, while the first few weeks of May will be feisty.

• June heralds a great month but maybe not the best for betting, although the June 21 summer solstice is especially auspicious and gold may surge.

• July is more relaxed with time to enact long-cherished plans and projects.

• In September, the trend is upwards and a mixture of considered and idle speculations offers the possibility of eye-popping returns.

• October is possibly one of the best months of the year, with life returning to the markets. It marks the return of a sustained drive upwards that continues into November, December and January.

• In terms of the Zodiac, a great year lies ahead for those born in the years of the Dragon, Sheep and particularly, the Horse. A relatively good year is in store for Rats, Cows, Rabbits, Roosters, Dogs and Pigs, while it will be a bumpy ride for Tigers, Snakes and Monkeys,” it said.

“She will take on some of the toughest competition of her career and come out on top. For China’s wealthiest man, BYD CEO Wang Chuanfu, a Horse, the sun will continue to shine as it has since Warren Buffett invested into his company and set the price soaring.

“And for Buffett, also a horse, the future looks just as bright. He is about to enter the most financially lucky period of his life. Expect some significant and unusual developments in Berkshire Hathaway’s already substantial interest in China,” it said.

“As the Chinese saying goes: ‘Once on a tiger’s back, it is hard to get off’. But if you can hang on, it is certainly the safest place to be. Enjoy the ride and Happy New Year.”


This article appeared in The Edge Financial Daily, February 4, 2010.

I'm getting mixed signals from around the world. Not one exchange is going to rally up strongly. Just a rebound here and there. For others, another test to the downside here and there. No strong trend. Just sit and watch. 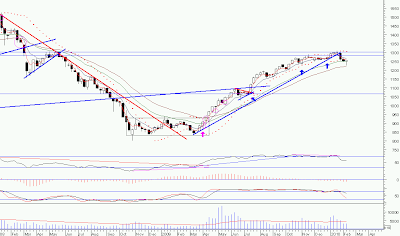 FBM KLCI Weekly Chart
KLCI may have found a temporary bottom, it should rebound from here, and then make another attempt towards 1200. Negative MACD/lower Stochastic means that KLCI will not rally higher than 1300. The most important thing now is base building. 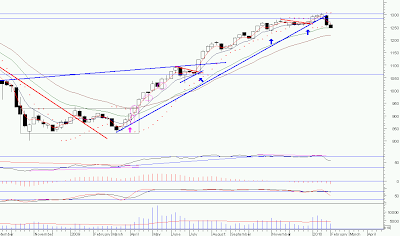 FBM KLCI Weekly Chart
Looks like a correction is underway. As I'm trading warrants mostly, I have no choice but to liquidate every warrant positions. Can't afford to wait for my call warrants to show positive or more profit. Time is not behind me. Every rebound towards 1300 only means liquidation action. Looking for the right time to get into put warrants. Currently, it is still too early to play bearish position. Market is making a correction and not making a big plunge like 2009....yet. I guess that there will be no ang pow for me this coming CNY. 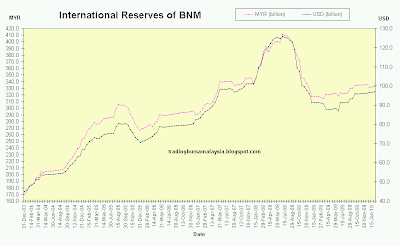 Email ThisBlogThis!Share to TwitterShare to FacebookShare to Pinterest
Labels: BNM

6 new warrants from 6 different countries! OSK is getting creative. Listing date is 3 Feb 2010.

Tired of tracking so many warrants with so many different foreign exchange rate? The solution is my Bursa Malaysia Warrant Calculator! Why not try it for 1 year?
Posted by swifz at 10:21 AM No comments:

I'm very busy with house painting. That is why I don't have the time to blog for the past week. I should be finishing the painting job by the end of this week. So, don't expect much until after CNY. 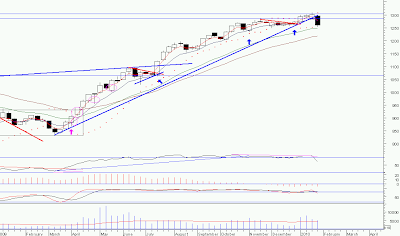 KLCI Weekly Chart
Just a quick update for Bursa Malaysia. KLCI weekly chart shows a bearish divergence. The selldown in the past week could be indicating the end of this uptrend from 850. No strong sell signal though. Therefore, wait for good buy signal before going in. Sector wise, every sector is under correction.


That is the only update for this week.
Posted by swifz at 8:19 AM No comments:

swifz
I'm just someone with a dream.